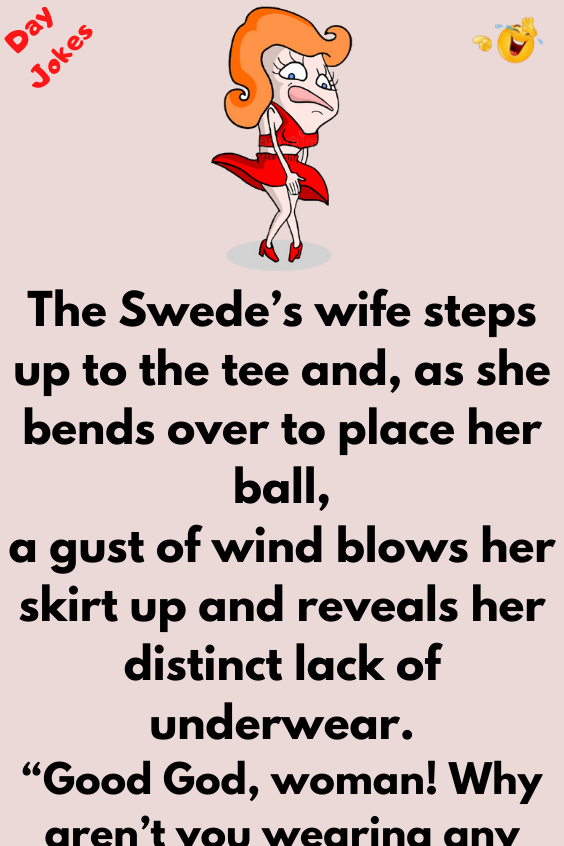 The Swede’s wife steps up to the tee and, as she bends over to place her ball,

a gust of wind blows her skirt up and reveals her distinct lack of underwear.

“Well,” she said. “You don’t give me enough housekeeping money to afford any.”

The Swede immediately reaches into his pocket and says,

“For the sake of decency, here’s a 50. Go and buy yourself some underwear!”

Next, the Irishman’s wife bends over to set her ball on the tee. Her skirt also blows up to show that she, too, is wearing no undies.

“Blessed vi**gin Mary, woman! You’ve no knickers! Why not?”

She replies, “I can’t afford any on the money you give me.”

Patrick reaches into his pocket and says,

“For the sake of decency, here’s a 20. Go and buy yourself some underwear!”

Lastly, the Scotsman’s wife bends over to the tee.

The wind also takes her skirt over her head to reveal that she, too, has nothing underneath.

She too explains, “You dinna give me enough money ta be able ta affarrd any.”

The Scotsman reaches into his pocket and says,