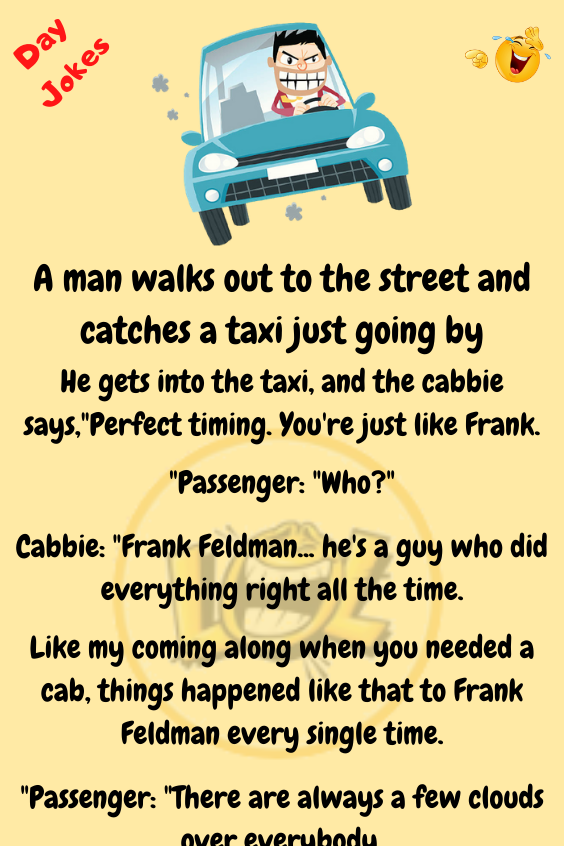 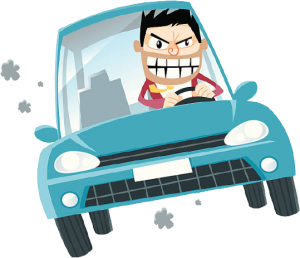 A man walks out to the street and catches a taxi just going by.

He gets into the taxi, and the cabbie says,

Cabbie: “Frank Feldman… he’s a guy who did everything right all the time.

Like my coming along when you needed a cab, things happened like that to Frank Feldman every single time.

“Passenger: “There are always a few clouds over everybody.

“Cabbie: “Not Frank Feldman. He was a terrific athlete.

He could have won the Grand-Slam at tennis.

He could golf with the pros.

And you should have heard him play the piano!

He was an amazing guy.

“Cabbie: “There’s more. He had a memory like a computer.

He remembered everybody’s birthday. He knew all about wine, which foods to order, and which fork to eat them with.

And he could fix anything. Not like me – I change a fuse, and the whole street blacks out.

But Frank Feldman, he could do everything right.

“Passenger: “Wow, some guy then.

“Cabbie: “He always knew the quickest way to go in traffic and avoid traffic jams.

Not like me, I always seem to get stuck in them.

But Frank, he never made a mistake, and he really knew how to treat a woman and make her feel good.

He would never answer her back, even if she was in the wrong; and his clothing was always immaculate, shoes highly polished too.

He was the perfect man! He never made a mistake. No one could ever measure up to Frank Feldman.

“Passenger: “An amazing fellow. How did you meet him?

He died, and I married his bloody widow…” 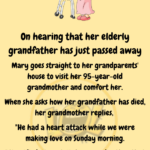 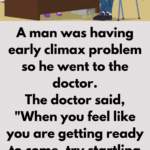