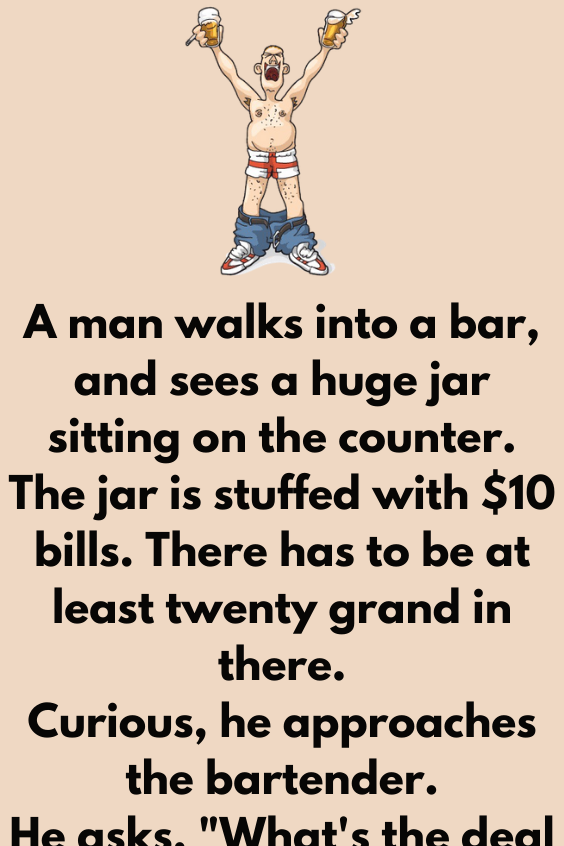 A man walks into a bar, and sees a huge jar sitting on the counter.

The jar is stuffed with $10 bills. There has to be at least twenty grand in there.

Curious, he approaches the bartender. He asks, “What’s the deal with the jar?”

The bartender replies, “You put ten bucks in, and if you complete three challenges, you win the entire jar.”

“What are the challenges?” “The money first.”

The man’s feeling game, so he fishes a ten-dollar bill out of his pocket and stuffs it into the jar.

“First, you gotta drink a whole bottle of tequila in sixty seconds or less, without pulling a face or puking.

“Second, there’s a large and angry pit bull chained up out the back.

It has a bad tooth. You have to pull that tooth out with your bare hands.

“Third, there’s a 90-year-old lady upstairs who’s never had coition in her life.

You have to go up there and nail her. “The man is stunned. “You’d have to be crazy to attempt all of that.”

“It’s up to you,” the bartender says, “but your money stays in the jar.”

Well, the night goes on and the man has a few drinks, and he keeps looking over at the jar, until finally he gets back up says,

” I’ll do it! Hand me that tequila!” The bartender hands the man a bottle of tequila,

which he unscrews and chugs down in under a minute without making a face.

He throws the empty bottle to the ground and charges drunkenly out the back door,

where he sees the chained-up pit bull. From inside the bar, the bartender hears growling and barking and snarling and screaming, and then silence.

The man staggers back inside. His clothes are ripped to shreds and covered in blood, and all over him are cuts and scratches and bite-marks.